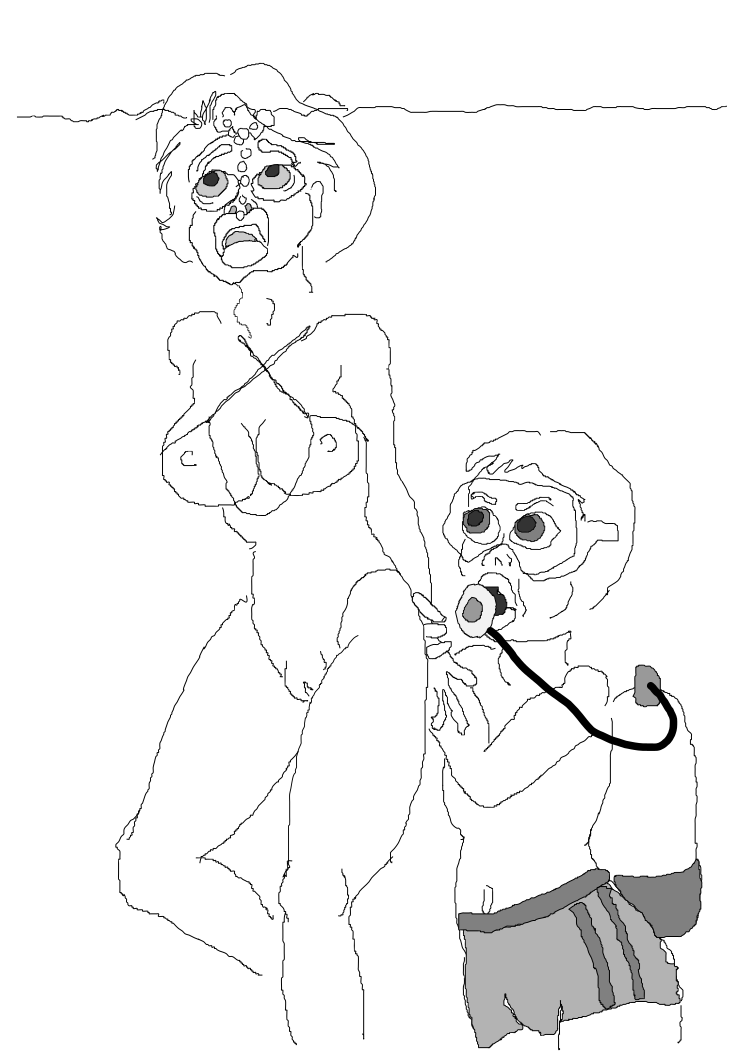 Janet swam the lake every day at about the same time. It was easy to don my scuba gear and wait for her. Sure enough, she came out at her usual time.

I swam underneath her, watching her form. I tried not to make too many exhalations in case she might discover my presence. There was just enough of a breeze that I don’t think she noticed me.

The longer I watched her, the more aroused I became. My cock strained in my swim trunks. The thought of drowning her became too much for me to overcome.

I came up underneath her and grabbed an ankle, jerking her under. I caught her totally by surprise. She really bubbled as she tried to kick free.

I let her go and watched as she reached the surface. I pulled on her ankle the moment she’d taken a breath. She never got the opportunity to cry out.

I pulled her down, enjoying the way she struggled in my grasp. I especially enjoyed grabbing her ankle and pulling her under. It made her nipples protrude through the top of her suit.

I let her go and she shot back up. I let her get a quick breath before I pulled her back down. The more I teased her with quick gasps for breath, the more she struggled and the more aroused I became.

I grabbed her wrists, holding them behind her back. I kept her just below the surface. She spewed bubbles as she tried to kick up. But I kept pulling her down so she couldn’t quite reach the air she needed.

I pulled her deeper, enjoying her sexy struggles. Then I pulled the top of her suit down, exposing those gorgeous mounds. She cried out as she tried to kick her way back to the surface.

I allowed her head to pop up long enough for a long, sexy gasp. Then I pulled her back down. That’s when she began to tire.

She kicked feebly as she struggled in my grasp. Sometimes her hair reached the surface, and sometimes she got up as high as her forehead. But I never let her breathe again.

I watched as the last of her sexy bubbles came out of her mouth. Then she started hitching and gurgling. I kept her just below the surface as she looked upward. That’s when my cock went off.

I held her right there, allowing her to see the surface mere inches above her head. She spasmed and convulsed in my grasp. Then the last of her air slipped out of her mouth.

I finned Janet down to the bottom of the lake. There were some reeds down there that looked appealing. I tucked her in, making it look like she’s swam down and gotten all hung up. Then I kissed her lips along with both of her erect nipples before I headed back to shore. 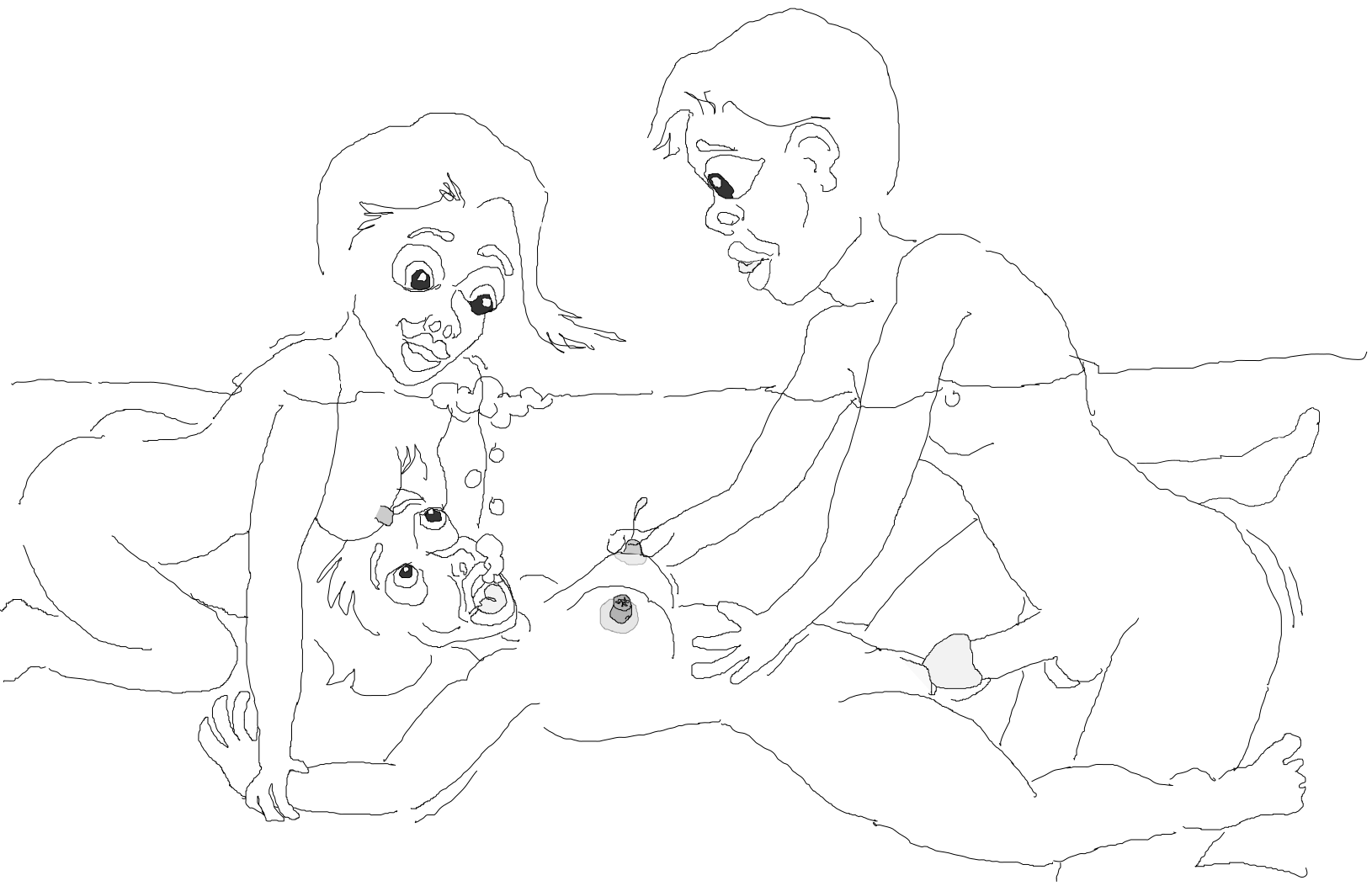 Barbara didn’t like Janet very much. I think she was jealous of her. She wanted me to get rid of her, but I was having too much fun fucking her.

Barbara found out Janet and I were out at the lake at our cabin. We liked to play in the water, and we liked to suck and fuck while holding our breath. We were in the water a few yards from our cabin when Barbara showed up.

Janet’s back was to the shore, so she didn’t see Barbara. That meant she didn’t see her take off all her clothes. Barbara put a finger to her lips, indicating I should be quite and not tell Janet.

Janet was sitting in my lap, impaled on my cock. She wanted to go under and hold her breath. So I pushed her backward and fucked her underwater.

Barbara waited until I let Janet back up. She carefully waded out to us until she was right behind Janet. Once more she held a finger to her lips.

I looked at Barbara as though I wasn’t sure I wanted to go through with it. I knew exactly what she was thinking about. Then she made the decision for me.

She got on her knees before pulling Janet over backward, forcing her flat on her back underwater. Then she looked at me and said, “Now fuck this bitch while I drown her sorry ass!” She pushed down on her wrists, making sure Janet couldn’t get back up.

At first I was going to tell her no. But I got excited thinking about watching Janet drown. My cock got really hard.

“Cmon!” Barbara urged. “Fuck the breath right out of her!” So I tweaked Janet’s erect nipples. Then I slid my cock right into her.

Janet was horrified as she looked up at us. She really clenched as I fucked her pussy. “Enjoy it, bitch!” Barbara called down to her. “This will be your last fuck, so you might as well enjoy yourself.”

Barbara had this gleeful look on her face as I thrust in and out of the woman she hated. Janet’s eyes opened wider and wider. Her cheeks bulged as her chest heaved. Then she spewed bubbles out of her nose.

Her mouth opened up and she lost all her breath. Then she started convulsing as she went into seizures. Barbara was so turned on watching her drown that I heard her give out an orgasmic cry as she creamed the water between her legs.

She pushed me aside and got a really big breath. Then she went underwater. I saw her lick Janet’s pussy as though she was trying to suck out all my cream.

I was hit with a sudden burst of inspiration. I pushed down on Barbara’s head so she couldn’t lift it back up. Then I told her, “I think Janet wants you to drown with your face buried in her twat, Barbara.”

Bubbles came up as Barbara struggled. But I made sure she couldn’t get her head up. A moment later there was this huge burst of bubbles. Then she went into convulsions as she started to drown.

She hitched and convulsed as I kept pushing down on her head. I stuck my fingers in her pussy and fingered her. I could feel her clenching as she continued to drown. Then she went still.

I let go of her body, thinking she might float to the surface. But she stayed right there on top of Janet with her face buried in Janet’s muff. I guess both of their lungs had flooded. It ended up turning into a nice two-for-one for me. 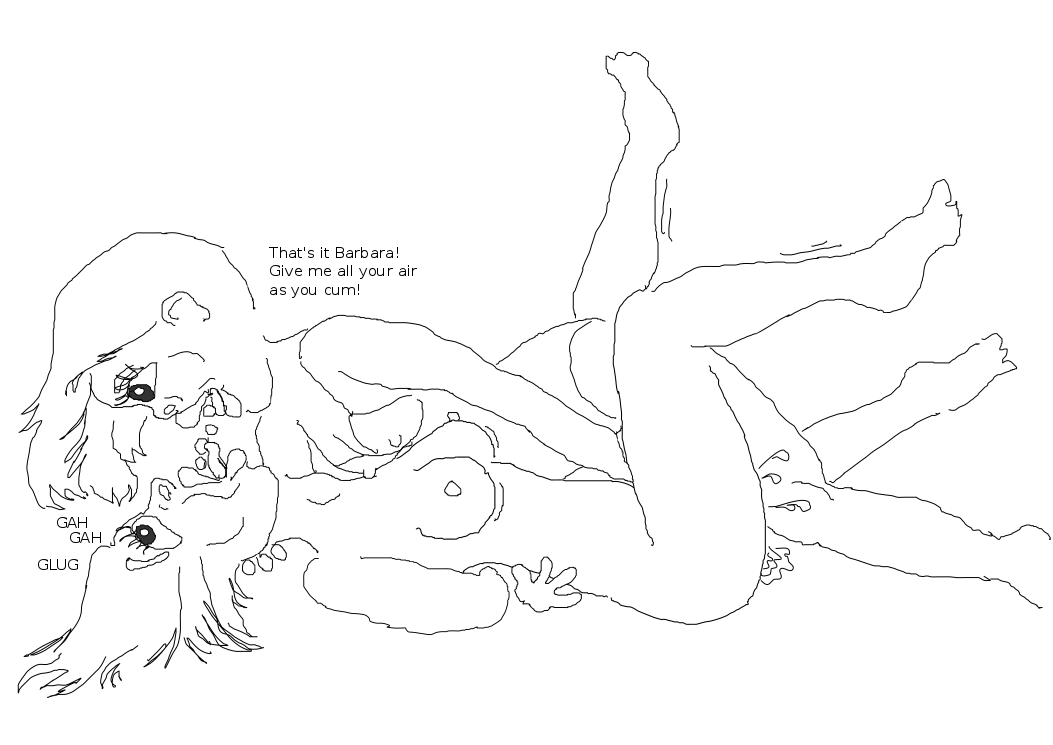 Barbara was Janet’s best friend. But Janet found out Barbara had been seeing me behind her back. Janet was supposed to be my girlfriend. But Barbara and I liked to fuck.

Janet lured Barbara out to our cabin on the lake. She said she had to go back to town in an hour. But I was coming out for a visit, and Janet asked if Barbara would be willing to entertain me for a while.

Barbara’s eyes gleamed. She figured Janet didn’t know. So she told her, “I’d be happy to stay out here until your boyfriend arrives.”

Janet talked her into a swim. So they headed out to the lake. They swam around a while in their bikinis.

Janet took off Barbara’s bikini top. Then she tied her wrists behind her back. Barbara thought she was just playing. But the game suddenly took a turn for the worse.

Janet forced Barbara to the bottom of the lake. They were in shallow water, but it was well above Barbara’s head while she was flat on her back. That’s when Janet removed Barbara’s bottoms and then started fucking her pussy with her fingers.

Barbara could hardly believe it. Her eyes opened wide as she shook her head. Her cheeks bulged as she tried to hold her breath.

Barbara’s head went from side to side. Air burst out of her mouth once… twice… then a third time as she couldn’t hold it any longer. Then she started hitching and gurgling.

Janet finger-fucked her hard while bubbling with excitement. Barbara’s pussy clenched violently around her fingers in her twat. She had seizures as she spasmed painfully. Then her pussy gushed as she went limp in Janet’s grasp.

Janet made sure Barbara was not going to surface. Then she left her there. She went inside the cabin to wait for me.

When I got there she greeted me with a kiss and a hug. I asked, “Where’s Barbara?”

“Oh, she’s out having a little swim,” Janet told me with a knowing smile.