Corinne and the Orc

Note: Corinne is an artist who takes cartoons and manipulates them. As a redhead, she often enjoys putting herself in certain situations. This is a story inspired by a couple of her creations.

There was a disturbance somewhere outside. Corinne went to the door of her hut and looked out. She could see nothing.

She went back inside. But she could hear voices getting louder. Whatever was happening outside was getting closer.

Curious, she went to her door to look out again. That’s when it flew open. A female orc burst in, catching her totally by surprise.

The door was slammed closed. Corinne started to cry out. That’s when the orc came over to her and pulled her into the corner.

A mouth was placed over her hand, silencing her cries. Corinne grunted in alarm as she was pulled back against the large, female creature. Then she heard a feminine voice whisper into her ear, “Make a sound, human, and I’ll snap your scrawny neck.”

Corinne went limp in the orc’s grasp. The voices drew closer, becoming louder. Then she heard hut doors opening and closing outside. It sounded like they were conducting an extensive search.

“If they come inside, I’m taking you with me,” the orc warned, improving her grasp on her prey. Corinne trembled with fear and a perverse arousal.

There were more sounds of doors opening and closing, sounds indicating the search was approaching her location. Corinne could hear the doors opening to her neighbors’ huts. Then there was a cry from somewhere down the street.

There was a rush of footsteps that passed by the door of her hut. The searchers’ voices faded. Then Corinne heard nothing at all except the pounding of her heart and the heaviness of her breathing.

“Not bad for a human,” the orc murmured from behind her.

Corinne felt the creature take a good long sniff of her neck. A hand reached down and fumbled through her skirt. Then it found her underwear and proceeded to rub.

The other hand came away from her mouth and moved down to her chest. Her breasts were savagely groped as the other hand continued to rub. Then she felt a tongue in her ear as the creature purred, “What’s the matter, human? Are you attracted to orcs?”

Corinne trembled as she struggled to catch her breath. What was worse: being molested by an orc? Or being killed by one? She wasn’t sure she knew the answer.

Protruding fingers pushed hard up into her womanhood. Corinne winced as she bit her lip. Then she shuddered from a shameful climax.

“I think they’ve gone. Sorry I can’t stay to play with you, human.” Then the orc spun her around and kissed her hard.

Corinne swooned as she became breathless again. Their lips parted as the orc looked at her hungrily. “Another time, human.” Then the female creature slipped out of the door and was gone.

Corinne stood there panting heavily for breath. What the hell had just happened?? Had it all been a dream?

Impossible. She could still taste the orc’s breath in her mouth… could feel the pressure of those lips against hers. And she was still quivering from the humiliating, yet arousing, violation.

She cautiously opened the door and looked out. But the muscular orc was long gone. She slipped back inside her hut, pondering what the hell had just happened.

“Did you hear? They caught that orc last night! They’re hanging the outlaw right now!”

“Down at the gallows! You should come and see!” Then the woman ran off.

It was almost noon. Corinne could hear the sound of peasants scurrying down to the town square. There was always a large crowd whenever there was a hanging.

Corinne started walking toward the square. Then she broke into a jog. The jog quickly became a run. For some reason she didn’t want to miss this.

Was it that same orc that had burst into her hut? She knew there was an outlaw being hunted down. Was it that female creature who’d molested her last night?

She raced to the town square. A large crowd had already gathered. There was bloodlust in the cries being directed toward the gallows.

There was one victim on the left trap. Corinne immediately recognized her as the female orc from the night before. A white cloth had been tied around her mouth, removing the ability to speak.

Black straps wound around her upper chest and legs. Her dirty brown tunic from the night before was now missing. Exposed were her large breasts, barely contained within what looked like a makeshift bra.

The covering going down to her upper knees was also gone. She was reduced to some sort of thin fabric over her woman parts. A sheen of perspiration had broken out all over her, perhaps from her predicament.

Corinne panted for breath as she stared at the unfortunate creature. The town was not showing her any mercy. If she was guilty of the crimes Corinne had heard about then she could certainly not blame them for their animosity. And yet she wished the orc would not be hanged.

Cries rose up, calling for the hanging of the female orc. The creature looked around defiantly. It looked like she was about to die the way she had lived, giving no mercy and expecting the same.

There were more cries demanding they proceed with her hanging. A man moved over to the lever, an individual Corinne knew was not the official executioner. Apparently the townsfolk here were taking matters into their own hands.

The orc found her in the crowd and locked eyes with her. Corinne saw no pleading in those blue pupils. Instead she saw the look of a lustful creature who would certainly love to have its way with her if freed and given half a chance.

The lever was pulled, causing the orc to fall to raucous cheers. She hit the end of her rope and bounced a little. But her neck did not break. Orcs’ necks were quite strong. And despite her feminine features, this one was going to take a long time to strangle to death.

The orc grunted as sweat poured down her face. Her legs kicked as she jerked on the end of her rope. And still she locked eyes with her host from the night before.

Corinne was wet as hell. That orc was lusting after her even now, amazingly while she was dying! It made her breath catch in her throat. 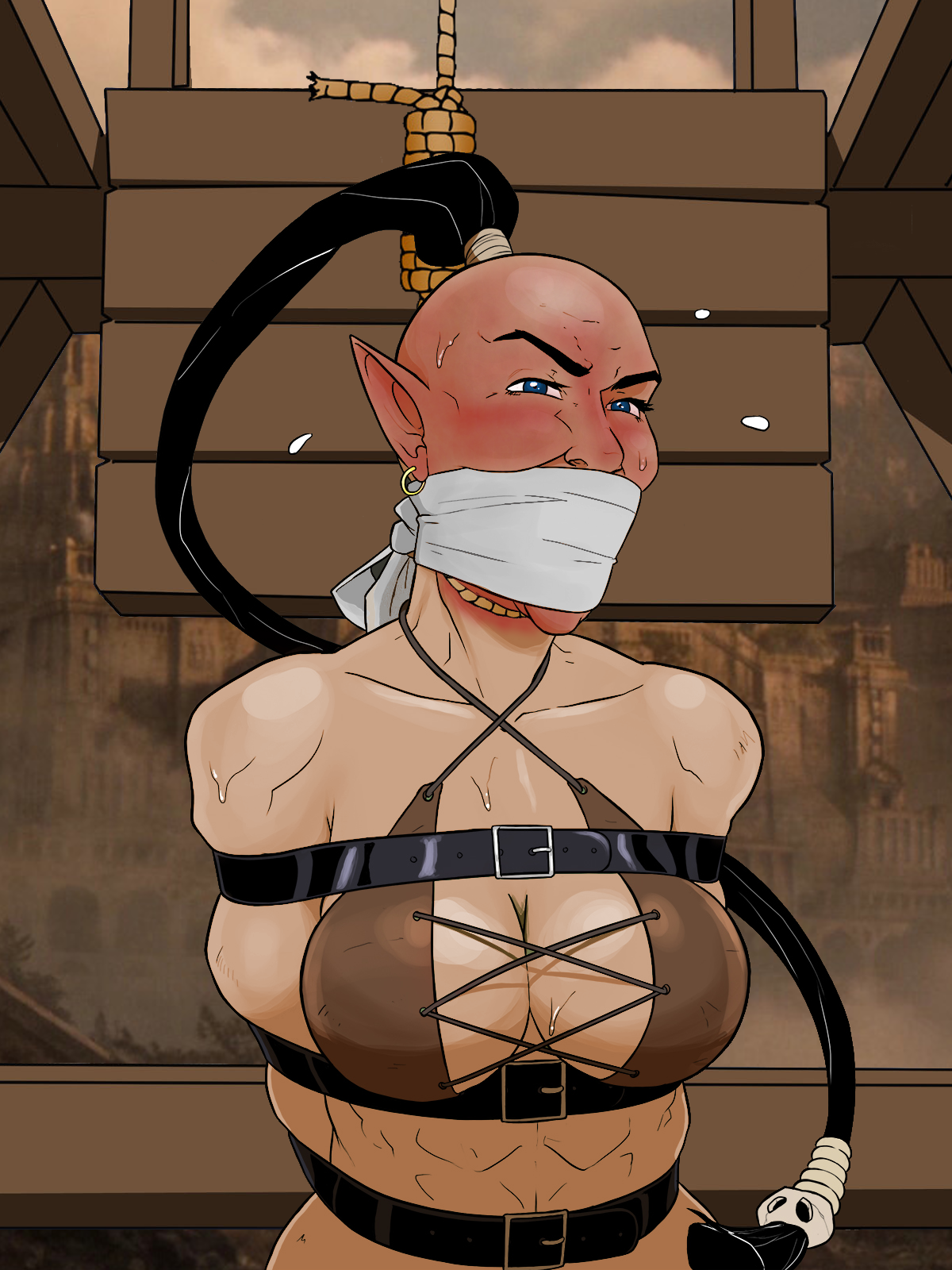 “This one hid the orc!” a female voice suddenly cried out. “I saw it come out of her hut!” Corinne turned and was horrified to see Lottie Ansel, one of her neighbors, pointing accusingly at her.

An angry cry rose up. Corinne took a frightened step backward. Then she glanced up at the dangling creature. Was the orc smiling under that cloth, suspecting she was now about to suffer a similar fate?

Rough hands grabbed Corinne and dragged her to the gallows. Voices cried out to hang her as an accomplice. She saw a couple of individuals she recognized as other neighbors on her block. But they showed no sympathy towards her whatsoever.

The orc was still kicking when she was hauled up onto the gallows. Several men quickly bound her with rope. Corinne was amazed how they could produce binding material so fast.

She shook her head as she started to cry out, “You know me! I’m not an outlaw!” But a black cloth was quickly wrapped around her mouth. Further protests were muffled.

She was dragged onto the second trap. She’d only witnessed one other double hanging in the last six months. Corinne had no idea she would one day play a prominent role in its future operation.

She shook her head as she let out more muffled cries. The townsfolk hollered to see her strangle at the end of the rope. She shook her head again as she made eye contact with the woman who’d accused her. Then she heard the lever being pulled.

The trap fell away before her. Corinne prayed for a quick neck snap as she fell. But she did not fare any better than the creature dangling next to her.

She hit the end of her rope and started to suffer. Her face turned red as she started to kick. Then she locked eyes with her neighbors, staring with barely concealed fury and hatred. 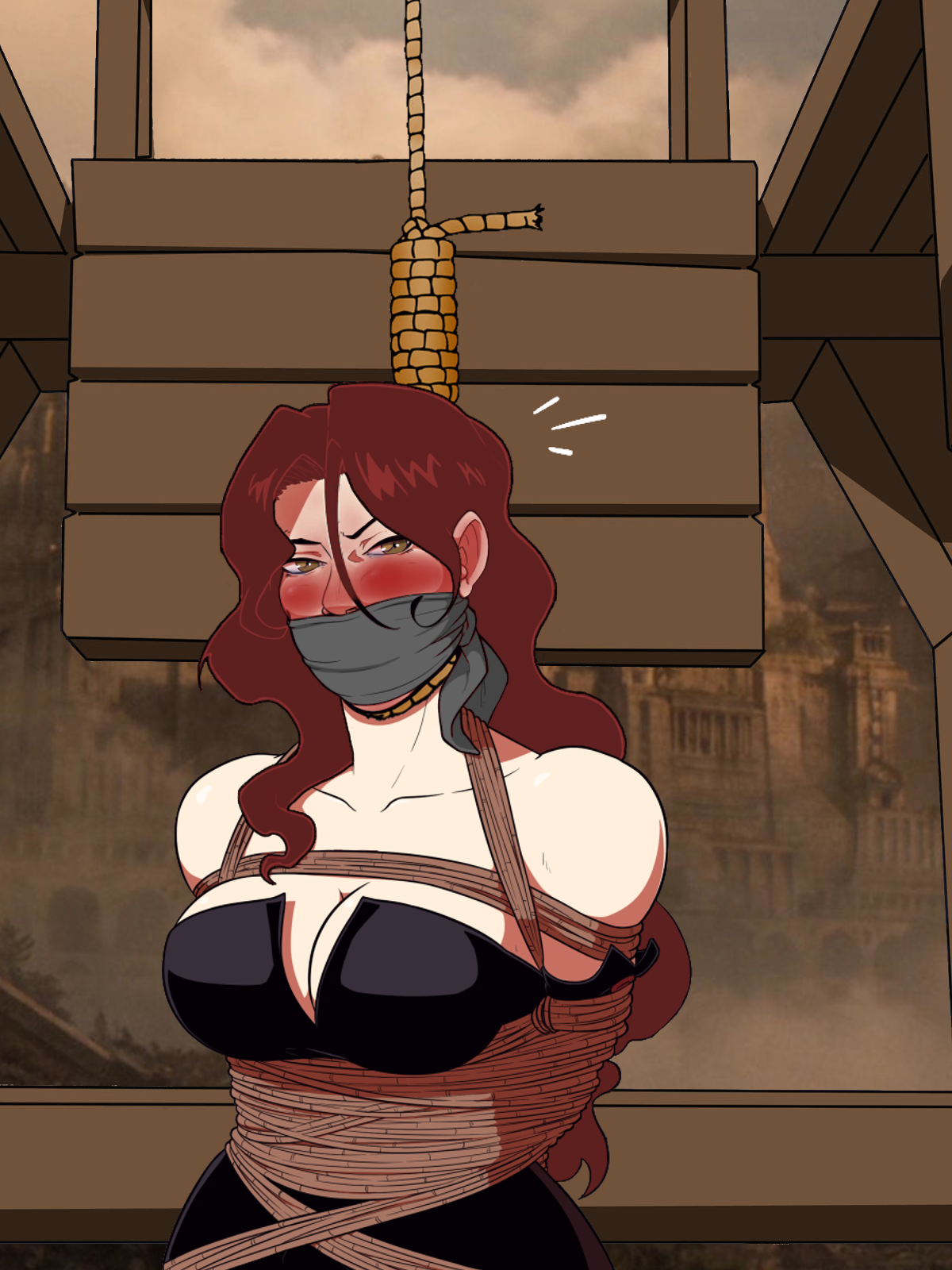 She kicked and struggled, twisting helplessly until the orc swung into view. They locked eyes again as she struggled to get a decent breath of air down her throat. Despite the agony, the creature looked at her lustfully as though enjoying her struggles. Was the damned thing enjoying watching her hang… watching her writhing, suffering body??

Corinne felt shame mix with agony. She could feel the female creature rape her with its eyes. It did not seem to care it would soon breathe no more. Somehow it was enjoying the moment, enjoying watching her suffer in abject humiliation at the end of a rope.

As Corinne jerked and convulsed, she saw the female orc begin to hump in her direction. Her own face reddened with breathless agony and shame. All around her the townsfolk cheered for their impending demise.

They laughed and jeered as they pointed at them both. The orc’s face had turned a deep shade of red. But beneath that cloth was a smile of cruel pleasure and satisfaction.

Corinne couldn’t feel her legs anymore. Death was slowly climbing up her limbs. The cheers from the townspeople were starting to diminish in her ears.

The orc kept humping in her direction. Corinne trembled from one last orgasm, humiliated over the way the creature seemed to know nothing other than seeking one last pleasure before its breath was permanently taken away. Then consciousness mercifully faded away.

Corinne gently swayed back and forth as her bladder released. But the orc fought an additional ten minutes, ten agonizing minutes. Each conscious moment was spent humping in the direction of the dangling woman, getting all the pleasure it could out of seeing a dead female human at the end of a noose.

The female orc’s last thoughts were regrets she had not taken full advantage of the human the night before when she’d had the chance. Then she shuddered hard as she pissed herself. Both females – orc and human – dangled lifelessly as the townsfolk released their bloodlust until they were satisfied and began drifting away.

The bodies were left up until sundown. They were taken away and buried together outside the town in an unmarked hole in the ground. Neither were mourned nor remembered.

(Inspired by her two creations I included.)