The last to die gets to live

It’s spur of the moment; I have no idea where Master is taking me. But he has me all dressed down in my sheer white top and skirt, neither of which hides anything. I suspect I’m about to be put on display.

When we arrive at what I can deduce is some sort of club we’re intercepted at the front door by some haughty bitch in domination garb. “I’ll take her from here,” she tells him. Master just smiles and tells me to be a good girl and do what I’m told.

I feel a shiver of alarm. Do what I’m told?? What am I going to be told to do?

I’m taken to a back room. When the door opens I see I’m not the only one who’s been brought here. Five others are standing around uncertainly in various states of what I can only refer to as fuck-me attire.

The dom woman tells me not to cause trouble and then closes me in with them. The women in the room all look at me as if they don’t know what to do with me. I feel like the new girl on her first day of school.

I scan my companions, noting their attire. A black-haired woman is wearing a fishnet body stocking while a girl with long brunette hair wears something similar only with much bigger holes in her material. A blonde is in a sheer leopard print one piece that’s cut well up her thighs.

A brunette wears a sheer black baby doll outfit. The last one has dark hair down to her shoulders and is in some sort of black corset that makes her large boobs compact together. Her thong is pulled aside to reveal her slit. We’re all in heels of various sizes, indicating we are probably to be put on some sort of display. At least that’s how I process what’s going to happen to us.

None of us speak. I wouldn’t know what to say anyway. There’s a sense of tension in the room. We’ve all been brought here for some reason, and I have a very bad feeling.

Ten minutes later three women in those same domineering outfits come into the room bearing handcuffs. Each one of us has our wrists cuffed behind our backs. Now I’m truly anxious. 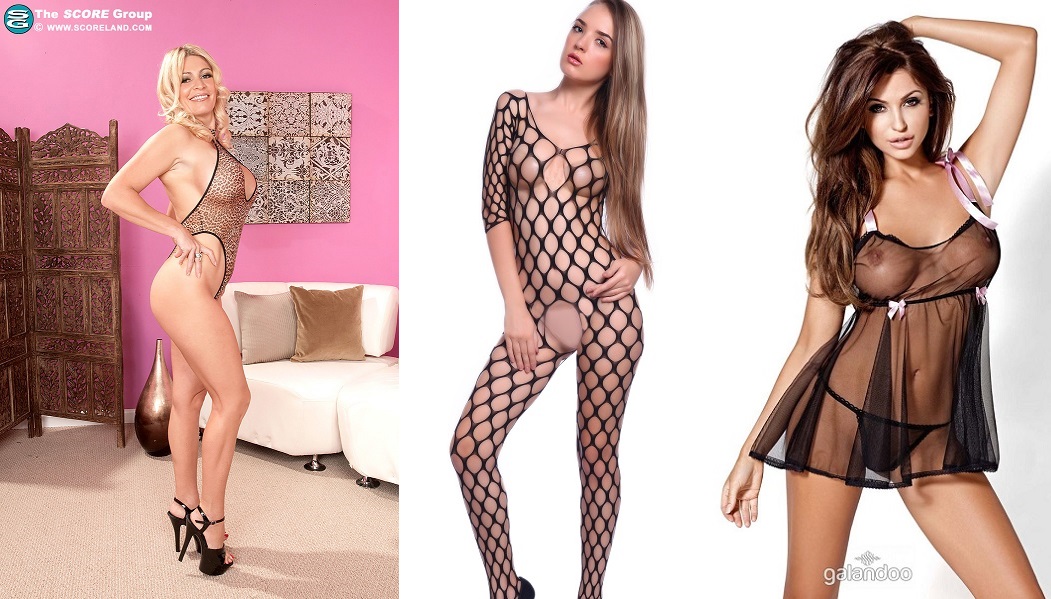 me, then fishnet, with busty lingerie bringing up the rear. I don’t know how else to refer to them. None of them have spoken so we don’t have names for each other. Right now I feel as though we’re just objects. 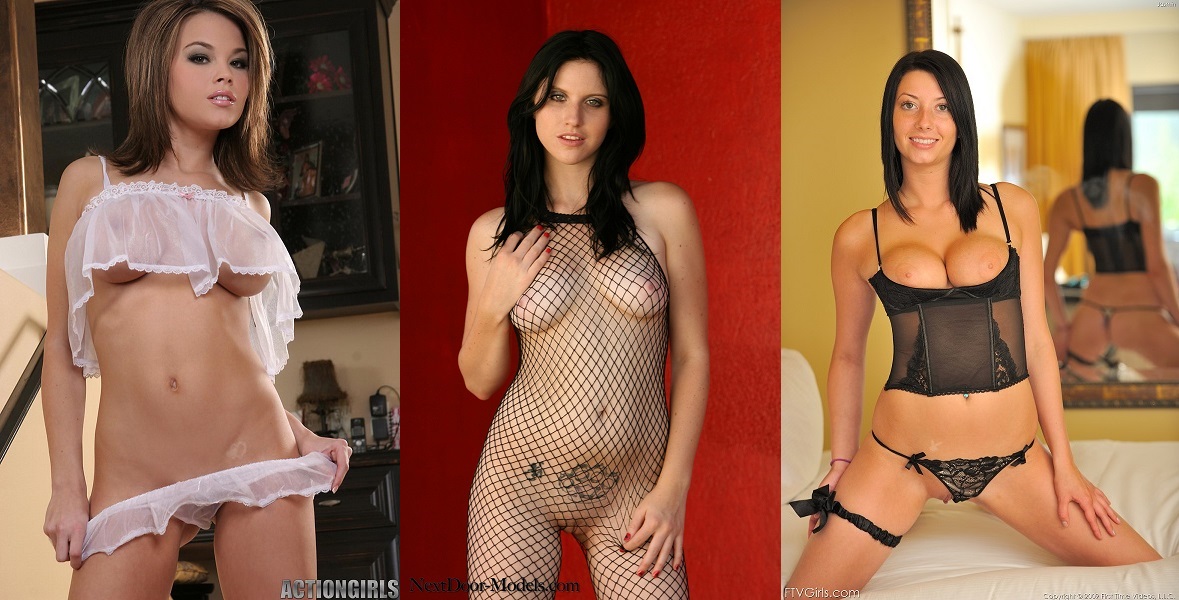 One of our escorts opens a door ahead and ushers us all through. I hear gasps from the women in front of me. Then I see what it is that’s caused such a reaction.

There’s an elevated stage with some sort of wooden crossbeam in the ceiling. Dangling from it are six nooses that hang down from holes cut up into the beam. Off the stage I see a large number of men and woman have gathered, some sitting at tables while others stand milling around.

We hear a male voice declare, “Place your bets. Ladies and gentlemen, place your bets.” Then I watch as those three women who escorted us start noosing up the blonde, long hair, and baby doll to my right.

My breath catches in my throat, and I look out into the audience in alarm. I finally catch sight of Master. But he’s talking to someone who’s writing something down. Is he betting on me??

The three of us not being attended to can only watch in stunned silence as half our number is noosed up. I hear little hums as their nooses appear to be raised and lowed out of the ceiling beam. Those first three stand in horror as their nooses are snugged around their necks, snugged to match their varying heights.

I look into the audience at Master again in horror, pleading with my eyes. He’s not even looking at me. Other men and women are talking to others who are taking notes as though many more wagers are being made.

The last to what gets to WHAT??? I stiffen in alarm as I start to hyperventilate. By now the three bitches have finished and are working on us, getting us all noosed up and ready to hang.

I can’t believe it! Is that why Master brought me here? Is he wagering how long I can hang before I die? What’s going on??

I glance on either side of me to see the others are just as terrified as I am. Our odds are not good. Only one of us is slated to survive; that is, if her noose doesn’t do any permanent damage to begin with.

“Ladies and gentlemen, the bet will be lost when the woman you’ve chosen can no longer control her bladder. That will indicate she is too far gone and is officially out of the running. Place your bets, please.”

I pant like crazy, my nipples hard and my pussy throbbing. I can’t believe this is happening to me. Neither apparently can any of the others. A couple have that deer-in-the-headlights look.

Those three doms finally step away. The six of us are left standing snuggly noosed in line, trembling on our heels. I finally make eye contact with Master. He smiles back at me. Does this mean he’s confident in his wager? Did he bet on me or against me?

“If I were you, ladies, I’d suggest you try to control your bladders for as long as you can. Good luck.”

I don’t know what registers first: the mechanical hums or the fact that my noose has tightened around my neck. The next thing I feel is a strain on my throat as I’m lifted upward with the others. My arms jerk behind my back as my feet flutter. My top ruffles to give tantalizing glimpses of my tits, not that the sheerness of the fabric can hide anything.

Something clicks in my brain and I try not to struggle. Maybe if I don’t move I will last longer and this will all be over. I try to control myself, but I feel panic setting in from the agony around my neck.

Long hair starts to rasp as her legs go flying. Her hair flows everywhere as she fights her noose. I suspect it will only tighten if she keeps on like that. And sure enough… it does and she fights harder.

On my end busty lingerie starts kicking and fighting as well. Maybe her boobs are pulling down too much on the noose around her neck. The other three start to flutter with their feet as they lose control.

My own noose becomes too much for me to ignore. My legs fly instinctively as I join my suffering sisters. The entire line goes off in kicks and struggles, the six of us putting on one hell of a show.

We kick, twist and gyrate, our bodies fighting for the right to live. Long hair jerks in her noose and then hangs limp. I hear a splatter of urine as a puddle appears beneath her feet. Ohgawd!

On my end busty lingerie kicks up a perverse dance until she too goes limp. She gently sways back and forth. Then a puddle appears beneath her. Two down; four to go!

I try to stop struggling, but my body can’t help reacting to a shortage of breath. Somehow I regain control and manage to hang limp. I hear murmurs in the audience as people point to me.

Do they think I’m gone? I’ve got to hold my bladder. Ohmygawd; my legs want to kick again!

I catch sight of that blonde in the sheer leopard print kicking like crazy. She can’t last long at that rate. She barely jerks herself limp before her bladder gives way. Half of us are gone, corpses swaying for the entertainment of all.

My legs want to kick again; it’s so hard to breathe! Baby doll’s on my right and fishnet’s on my left. Somehow I have to outlast both of them!

The three of us kick and sway, our legs fluttering for the floor. Baby doll loses one of her heels. Next to me fishnet looks like she has plenty of life left. I want to struggle so fucking bad that it’s almost impossible to hang limp.

I lose control and my legs go off, pedaling and scissoring. I struggle to breathe, but I can hardly get any air down my throat. Then baby doll jerks once before I hear her pissing herself.

Fishnet and I kick in one last duet of death. I struggle to catch sight of Master, but my vision is spiraling inward. Is he even out there anymore? Is anyone out there watching us?

I exhaust myself until I hang limp, my feet wriggling my heels around. My chest hurts; my lungs are on fire. Next to me fishnet has quieted down as well.

I struggle to control my bladder. But I feel like I’m losing the fight. Then I hear a little splatter right next to me.

I hear a cheer as consciousness starts to fade. I’ve lost all track of where I am and what’s happening to me. Then I hear applause. A moment later I can breathe again. My noose is gone.

My eyes flutter open. Master is onstage with me and has me in his grasp. “I’m so proud of you, baby.” Then he kisses me tenderly.

I smile weakly. I guess this means I get to live… for now. As long as he’s proud of me I guess that’s all that matters.

(Inspired by an idea by unknown32)

2 Responses to The last to die gets to live