(A bonus story with another elf theme.) 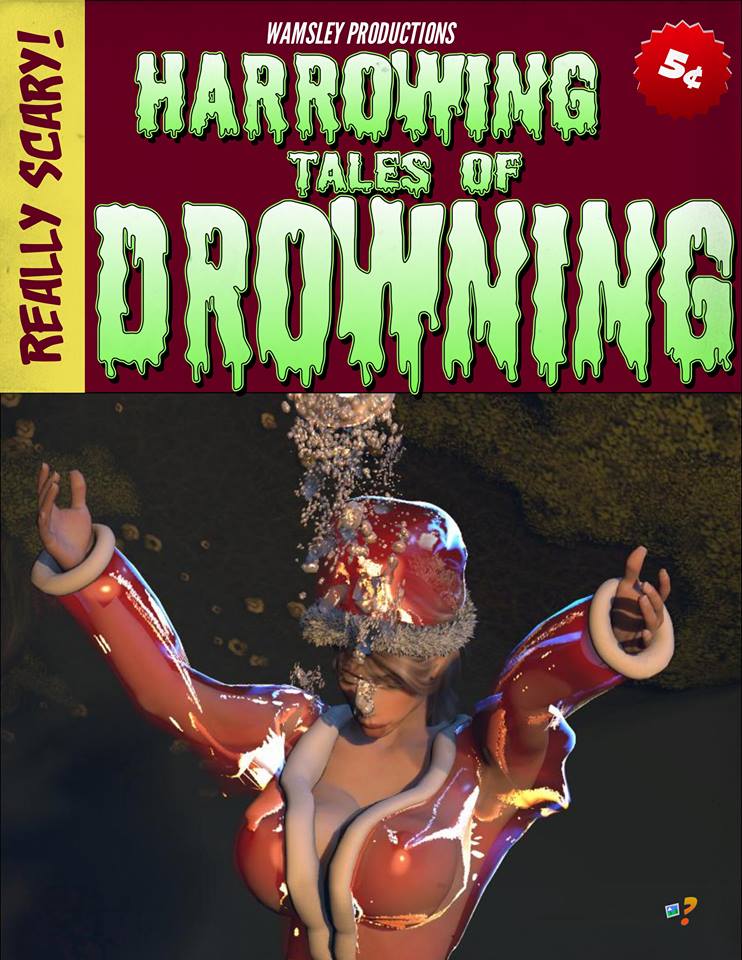 Janae was an incurable flirt. What’s more, she loved sex. And she loved having it in different places with different individuals.

She liked wearing latex as often as she could. It rubbed against her skin and added to her arousal. And much of the latex she wore was see-through.

As the Christmas season approached, she began considering what it would be like to get it on with an elf. She wondered how big they grew their penises and what kind of sex they were capable of having. So she sent a letter to the North Pole telling Santa she was available and was willing to do anything (so long as it meant coming in contact with a few elves).

One night she went to sleep in her latex red suit and Christmas hat, rubbing herself and getting herself off while imagining what she might do with an elf or two. The next morning her bedroom looked different. She was not in her bed, and there were elves standing around her looking curiously at her.

Janae felt a certain excitement. Was she dreaming? Was this the opportunity she had hoped for? So she asked the elves what she could do for them.

They told her they’d been working long, hard hours and needed a break… a recharge, so to speak. They kept staring at her red latex outfit. Janae felt her nipples harden at all the attention she was being given.

She got up and followed them out, offering to help them in any way she could. On the way she passed by a glass door. Behind it she detected a strong chlorine smell.

“You have a pool??” she gasped in amazement.

“It helps us keep in shape for the long days working the assembly lines,” one of the elves told her.

“I’m really good in the water!” she told them excitedly. “Why don’t you have the elves who need a break watch me swim?”

Two of the elves led her into the pool area. She didn’t even bother to disrobe. She jumped into the pool in her red latex outfit, enjoying the double sensation of being encased in latex while holding her breath underwater.

Janae swam around, holding her breath and releasing bubbles. When she surfaced she saw more elves had arrived. These elves looked mature, perhaps the older ones who got tired quicker.

She smiled at them as she swam back and forth, gyrating underwater while holding her breath. It felt really good; she could feel an orgasm coming on strong. Performing in front of all these elves was a real turn-on!

She reached under her red outfit and began playing with herself. It swelled until she cried out in bubbly orgasm at the bottom of the pool. Then she surfaced, panting quietly for breath.

Several elves had changed into red swimming suits. And many of them were sporting erections under those suits. It looked to Janae like some of those elves were endowed quite nicely!

She smiled coyly at them, asking if anyone wanted to join her for a swim. She said it might help relieve the tensions of a hard day of work. And she also gave the indication she might be willing to help “relieve” some of the other tensions as well.

Three of them eagerly jumped into the water with her. Janae swam around with them, diving to the bottom as they tried to chase after her. She wanted to make them work for it a little.

When they caught up to her, she allowed her hands to playfully rub those bulges through their swim suits. If anything it made their erections harder underneath. Janae felt herself becoming giddy with sexual arousal.

One elf pulled his suit all the way down off his legs. Janae took advantage of the situation to grab his cock and stroke it. The second elf did the same along with the third one until all three were naked. Janae happily took turns groping and stroking them while remaining underwater holding her breath.

She surfaced to refill her lungs. Then she went down with a cock in each hand. She stroked them both as the third shoved his dick between her lips.

More elves jumped into the water to join her. Soon she was working on holding her breath for three minutes at a time, trying to stroke elf-cocks into releasing their loads while sucking on others in her mouth.

Janae wasn’t sure how many she serviced. She even felt a couple of naughty elves lift her robe from behind and fuck her underwater in the pool. It wasn’t long until she began experiencing one orgasm after another.

She was at the bottom of the pool with four elves when a sudden cry went up. Quick as a flash, the elves left her, scooped up their suits and got out of the pool. Janae surfaced, only to see an old man in a flowing white beard and large stomach looking at her. He was scowling.

“You’ve been corrupting my elves, you naught girl. It’s time I take you away from all this.”

“I’m sorry. They said they worked so hard and needed a break. I was only trying to help.”

Janae felt guilty at Santa’s displeasure. She climbed out of the water and dried herself off. “Let’s go,” he told her.

She followed him out to a small barn, still wearing her latex suit and cap. His sleigh was already hitched up to one of the reindeer. He bid her to climb aboard before he got in and sat beside her.

The barn opened and he used the reins to get the reindeer moving. Out they went into the darkening sky. Within moments they were off the ground.

Santa didn’t say a word to her. He was not in his red suit and she was not used to seeing him dressed so casual. She was also concerned over the way he seemed so cross.

She noticed how they flew low over the ground, avoiding any type of civilized locations where they might be seen. It wasn’t long before they were out over water, the sun low in the sky. Janae didn’t know why, but she suddenly felt cold… as though a dark shadow had suddenly engulfed her.

“You’ve been very naughty, this year,” he told her wearily.

“You corrupted my elves.”

“It was only a little harmless fun. I didn’t mean anything by it.”

“I’m afraid this time that attitude just won’t do.”

“Santa, I really think you should learn to lighten up a little – aauugghh!”

“No coal in your stocking this year, you naughty girl. You crossed the line corrupting my elves. I think this time we’re going to do something a little different.”

“Santa NO!” A moment later the sleigh had come to a stop and was somehow hovering just a few feet above the surface of the water.

“No, Santa! I promise; I’ll be good!” Then to her horror she found herself standing in the bucket near the edge of the sleigh.

“Santa, they needed the break!”

“No, you just wanted to see what it would be like playing with the cocks of all those elves.” And then he stuck a booted foot in her back and pushed her out.

Janae let out a cry as she tumbled downward. Then she gulped down a huge breath right before she hit the water. The bucket took her straight down.

She bottomed out thirty feet below the surface. She looked up to see the shadow of the sleigh above. Then it took off, leaving her to drown all alone.

She felt her lungs start to heave as she thought about all those cocks back at the North Pole. Had it been worth it? Janae wasn’t sure. Now she would never swim again, now would she get to play with a cock or get to enjoy her fetish of tight latex. At least Santa had been merciful enough to allow things to come to an end in the water.

Her breasts bounced as her chest heaved. She struggled to hold her breath a few seconds longer. Then the air burst out of her mouth as she exhaled. 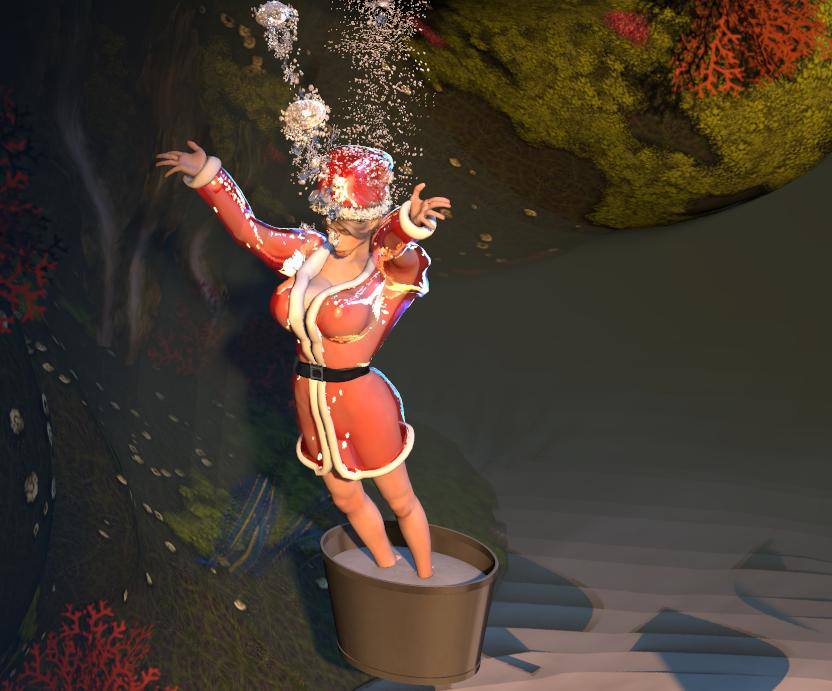 Instinctively she tried to take in a breath. It triggered a gag reflex, and she swallowed water. Then she started hitching and jerking as she began to drown.

Janae felt a massive orgasm approaching as she continued to gulp water. She tried waving up at the surface as though she might somehow be able to reach it. She lost a huge burst of bubbles as the last of her air left her flooding lungs. Then she stared in horror, shocked she was drowning at the bottom of the sea.

She was aware of the pleasure of orgasming as consciousness began to fade. Was this a dream? Please let this be a dream! Janae’s last thoughts were the sincere hope she’d imagined it all and would soon be waking up as everything went black…

(Pictures used with Skip’s permission for illustration purposes only.)